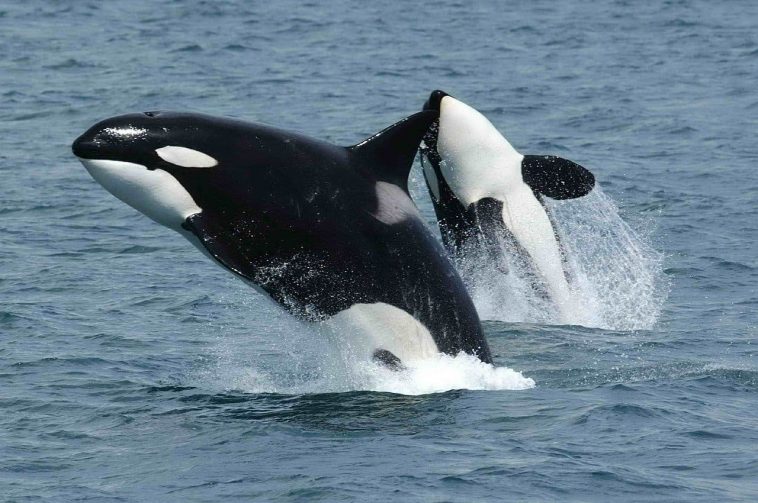 Whales are a widely distributed group of large marine mammals. They have a diverse population worldwide and exist in different species all over the world. The Blue Whale is the largest land mammal that can be up to 95 ft in length! There are about 20 different species of whales, some of which like the Beluga whales and the Killer whales can live more than 100 years. Gray whales make one of the longest annual migrations and can travel about 10,000 miles. With such a myriad of species and features, whales are one of the most intriguing creatures in nature. Here we have a look at the top 10 coolest types of whales on the earth and what makes them so special.

The Blue whale is the largest known animal on the earth. They can grow as long as 90 to 110 feet in length and can weigh as much as 24 elephants! Female blue whales are longer than their male counterparts. Blue whales have long, slender greyish-blue bodies, which appear blue underwater. They occur in almost all oceans, except the Arctic Ocean and the Bering Sea. Blue whales are known as baleen whales i.e. they have special structures in their mouths called baleen which strain food from the water. They have a broad, flat U-shaped head, and 270–395 black baleen plates on each side of their upper jaw.

The killer whale or orca is a toothed whale. Dolphins and whales are closely related, and the orcas are actually the largest member of the Dolphin family. They were referred to as “whale killers” by sailors or apex predators who saw them attack larger animals. Over time their name was changed to “killer whales.” A typical killer whale has a large, black-and-white body with a medium-sized white eye patch close to the eye. It lives in open water and feeding mostly on smaller whales in the sea.

The Humpback whale is a medium-length baleen whale that can grow as long as 16 m. They are called so as they raise and bend their backs to dive in the water that makes a hump in front of the dorsal fin. Humpbacks are known to live up to 50 years. These whales have long, white, wing-like flippers that are often as long as one-third of the animal’s body length. They also have long tails that can grow as much as 18 feet. Humpbacks are the most commonly known whales.

Belugas are the inhabitants of the Arctic and sub-Arctic ocean. They have a broad, rounded head and a large forehead and are toothed whales. They have a five-inch-thick layer of blubber to make them withstand the tough Arctic temperatures. Their dorsal ridge helps them travel through icy sea waters. They have broad, paddle-like flippers. They can also mimic the sounds they hear around them, including human speech.

The Narwhal, or Narwhale, is a medium-sized toothed whale that lives in the Arctic waters around Greenland, Canada, and Russia. These whales have a large “tusk” from a protruding canine tooth that can be as long as 9 feet that appear as a long spear. They eat small prey like halibut, shrimp and squid. Narwhals can only hold their breath for up to 25 minutes underwater. They have been known to swim up to 160 km per day while migrating.

The bowhead whale is another species of baleen whales found in the arctic and the sub-arctic waters. Bowheads are rich in blubber which can be up to 20-inch in places and have 2 blowholes located near the top of the head.  They have a large, bow-shaped head that is up to 40% of the body length. The largemouth is up to 10 feet wide and 20 feet deep. Their skin is usually black with a white spot on the lower snout. They are good divers and can vocalize when on migrations. It is also one of the amazing and beautiful types of whales.

The Pacific Gray Whale is one of the animal kingdom’s great migratory animals that dwell in The Pacific Ocean. It reaches a length of 15 m and lives between 55 and 70 years. This whale has a dark greyish slate colour with white patches on its body. They have a hump and a ridge of sharp bumps along their backs and do not have a dorsal fin. They feed on shrimps, small fish, and krill in shallow waters.

The sperm whale is the largest of the toothed whales and the largest toothed predator.  These whales are found worldwide. The Sperm whale is named so because of the Spermaceti organ which occupies most of its huge head. In the past, whalers have sought out the Sperm whale for the valuable spermaceti oil, which makes an extremely fine lubricant. They have a dark, brownish-grey body with light streaks, spots, and scratches. Their large head makes up to 33% of their body length and mass. These whales have a single blowhole on the left side of the head. They excel in deep diving.

Cuvier’s beaked whale is also known as the Goose-beaked whale. They are the most widely distributed of all the beaked whales.  These beaked whales have a long and robust body with a relatively small head that can grow as long as 32 feet. This whale obtained its name from researcher Georges Curvier. The species was identified from a skull found on the Mediterranean coast of France. They generally dwell in deep pelagic waters, usually deeper than 1,000 m. They prey on deep-sea fish, but often, they come to the surface.

The Spade-toothed whale is a very little-known species of whales. In fact, it is the rarest species of beaked whale. Until 2012, nothing was known about this species. The spade-toothed whale was seen for the first time after a mother and her male calf died on a New Zealand beach. The distinguishing features of these whales are the very large teeth, which are about 9 inches in length. A part of their tooth protrudes from the gums and has a shape similar to the tip of a spade. Beaked whales are excellent deep-sea divers and do not come to the surface easily.

These are the coolest types of whales existing all over the world. Sadly enough, 6 out of the 13 great whale species have become endangered or vulnerable, even after decades of protection. An estimated minimum of 300,000 whales and dolphins are killed each year as while others succumb to a myriad of threats including shipping and habitat loss. These are the 10 types of whales in the world.