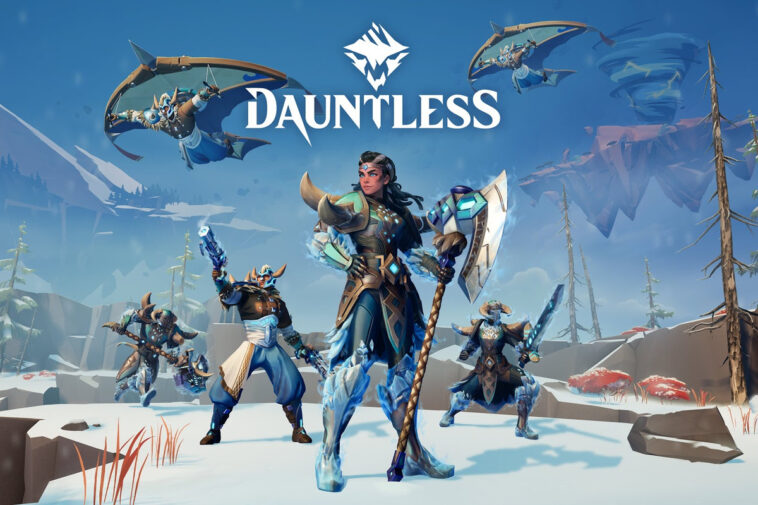 If you are fond of playing games and you are kind of obsessed with killing monsters in games and slaying over them, then DAUNTLESS is a perfect monster-killing game for you. Developed by the Phoenix labs, this game runs on almost all the platforms like PC, iPhone, Android, PlayStation4, PlayStation5, Xbox One and Nintendo Switch.

There are some big and nasty monsters you will want to kill with one blow. The nasty monsters called behemoths will make your gaming experiences electrifying. NPC in Dauntless is either a trader or quest giver.

If you are not customizing the option according to your own needs and leave them as it is, the game will bring you the very best of its experience, dodging fireballs and chopping the tails of the enormous beasts.

Coming to the games overall, Dauntless and Lfcarry is a ton of fun and a great game to play alone or with friends, with an option of different weapons available. It offers them a unique gameplay and allows them to master the tricks. Following are the reasons for the same.

Why Dauntless Is Popular

The game is all about progression. Every monster you kill provides you with a leap of crafting materials used to customize and craft weapons. To take down the ice monsters, we need to preserve and craft fire weapons, and we need to harvest the ice monsters to make good armor that can tolerate the attacks of even bigger monsters.

The enemy has clear strengths and weaknesses, so according to that, you can craft the right equipment to choose according to any given situation.

Besides creating your special equipment, there are different mastery levels. The Mastery level depends on the type of arms or the beasts we are annihilating. The mastery level increases in a specific field depending upon the tasks we accomplish. The higher the mastery level, the better gear you can make.

Each of Dauntless’ six weapons types is unique and powerful, with slots called cells which you can upgrade and customize according to your own needs. The katana is very balanced and useful, making it a good entry weapon.

The glitz of the war pike makes it an interesting weapon to wield for extended combinations. Hammers in the game are the slowest of all the weapons, but they harvest the most damage and then there is an ax, which we can place somewhere between the katana and the hammer usually used by the gamers for slicing and dicing.

Dauntless has got a rhythm of planning, plotting and execution in each fight, learning the enemy’s attack pattern and counter attacking them. Dauntless uses a Hunt Pass as a form of progression. It is easily available for free when you complete missions to unlock rewards, like in PUBG’s Royal Pass and Fortnite’s Battle Pass. You can pay a sum of 10$ to upgrade the pass to its Elite pass, which unlocks more rewards, including some skins of weapons and other customizable options to make your weapon and other skins look cooler.

Other features are also available, which offer to buy emotes, skins, boosters which increase the loot we gain and potions to boost your stats on the haunt. The rewards in the Elite Hunt Pass itself are attractive enough to buy the elite pass. Dauntless trades everything of those extra layers for something much smoother and more accessible.

You can play Dauntless privately without matchmaking, but if you die in between the game or during the hunt, then your rewards are dramatically reduced. The multiplayer mode is a blast. Working in a team to slay and hunt down a behemoth is rewarding, and between a wide variety of weapons and armor plus colored dyes, it is very rare to see two players that look the same.

The game keeps updating, bringing you new features, customization, enemy, maps and many more options, making the game interesting and thrilling. The new updates 1.8.3, which was launched on 2nd Dec 2022, get to see a new Behemoth: SAHVYT. After taking down this Behemoth, you will receive a new upgradable gear.

The chain blades have been refreshed and updated, making them more deadly than ever.

Two maps have been updated, where Sahvyt spawns in Cold Runner Key, Boreal Outpost and Cape Fury to increase the amount of adrenaline rush.

Why Dauntless 2022 Is Worth Playing

The following reasons are discussed below-

The gameplay has been improved by increasing the damage on almost all the weapons hit.

Blood VFX has been removed from hits to reduce clutter.

A new map of Ramsgate has been added to the main menu, along with a progress bar and a completed state of weekly activities on the challenge screen.

Combat explorations are combined with combat merits as well.

The game has improved performance during purchases of items, improved load across platforms, and performance while navigating the menu items.

Minimum specs which are required for the game are:

If you see your game crashing:

Many bugs have been fixed to deliver you great gameplay, which allows you to play and enjoy the game smoothly, especially while opening the Ramsgate after the weekly reset.

Also, we have a validation check where players cannot change their loadout while activating the Thrax ability.

Now we have Aether Strikers, under which it describes the Fusts of the Firebird no longer appear craftable when they’re not yet available.

Fixed bug where party invites from players on the same platform.

And many more updates have been done to give you a thrilling gaming experience and a good enjoyable time. If you are a monster slayer, it is a perfect adventurous game developed to give a seamless experience. Dauntless is an astonishing achievement that gives the thrill and joy, but it’s insanely fun and accessible monster-hunting action.

It is an endless cross-platform multiplayer game with unobtrusive free-to-play mechanics. Dauntless is worth playing the game in the year 2022, also a complete package of fun, thrill and adrenaline rush.