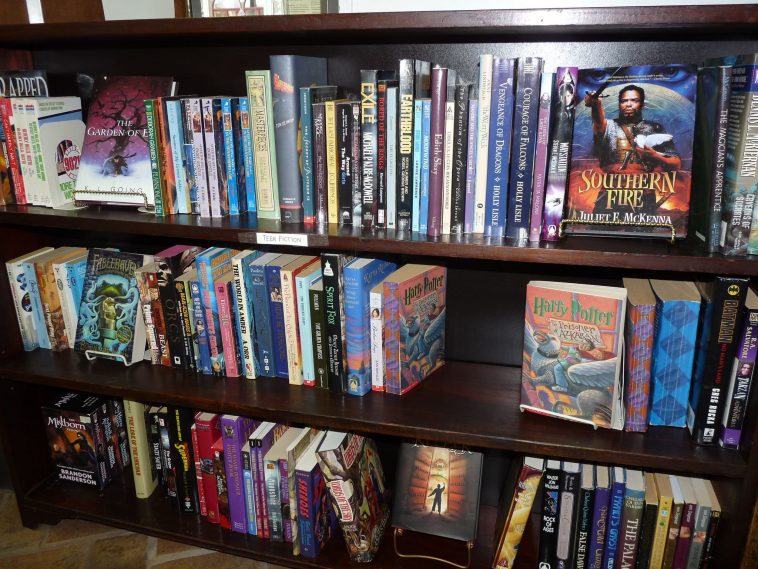 We are fortunate to live in a golden age of young-adult literature. Here are hundreds of books written for teens or young adults, by revered authors worldwide. These books have been equally adored by readers of every generation, who have sought solace in these mesmerizing stories of youthful dreams. We will discuss the best young adult fiction books.

Characters like Harry Potter, Katniss Everdeen, and Percy Jackson have become household names today and are strong characters from fiction that would be remembered for long down the aisle of time. Below we explore the top 10 young adult fiction books that not only have strong storylines but have also been reading blockbusters on bestsellers’ lists.

The Harry Potter book series by world-renowned author J.K. Rowling needs no introduction. Rowling’s brilliant writing, fantastic narrations of the wizarding world, and her unique touch that converts the same ordinary things in daily, unmagical life into something remarkable. Harry Potter struggles through the regular uncertainties and pitfalls of everyday life, among his team of mentors, friends, and villains, in the eternal struggle between light and dark.

2. The Chronicles of Narnia

This fantasy book series by C.S. Lewis is a classic children literature series that has brought accolades to the author. The books are set in the imaginary yet magical land of Narnia. Narnia symbolizes the perfect world or heaven. Adventurous journeys to the world’s end, fantastic creatures, and epic battles with evil forces —together constitute an intensely captivating storyline that has taken the world by the storm.

The Hobbit, or There and Back Again, is a children’s fantasy novel by English author J. R. R. Tolkien. It was widely acclaimed was awarded the New York Herald Tribune award for best juvenile fiction. The book remains popular and is recognized as a classic in children’s literature. Tolkien introduces Bilbo, the Hobbit, who goes through various phases in his treasure quest. He finally fights the Battle of Five Armies with his wit, common sense, and uncanny heroism.

4. Lord of the Flies

“Lord of the Flies” is a novel by William Golding that came out in 1954. The story is about a group of young boys who are stranded alone on a deserted island. They aim to rise to power and develop rules and a system of organization. However, without any supervising adults and lack of discipline, the children, Ralph, Jack, and Simon, eventually become violent and brutal. The story focuses on human nature, civilization, and the savage nature innate to humans. It teaches an important lesson that if the natural human desire for power and violence are subjugated, human culture can lead us to act responsibly and sensibly, as boys like Piggy and Ralph did in the novel.

5. The Lord of the Rings

The story revolves around One Ring, which contains the future of all civilization but was lost for centuries. Evil forces are searching for it, but as destiny would have it, it is placed in the hands of Frodo the Hobbit. Frodo is entrusted with the task of destroying the One Ring in the fires of Mount Doom as a ring bearer. Interesting twists in the plot and the chase of the Ring by different creatures make it worth a read and a fantastic story to remember.

6. The Fault in our Stars

The Fault in Our Stars is a novel about two star-crossed lovers’ love and death. The main character, Hazel Grace, is a young woman who has been battling thyroid cancer for years. She meets Augustus Waters at a cancer support meeting, who is recovering from cancer. He helps her break out of her shell and see the bright side of life. This book is a touching and profound love story in recent American fiction with brilliant characterization and a beautifully wrought story.

Percy Jackson is a remarkable series of fantasy adventure novels written by American author Rick Riordan and the first book series in the Camp Half-Blood Chronicles. All the books in the series revolve around Poseidon’s demigod son and his friends on dangerous quests and wild adventures. They meet gods, battling monsters, and indulge in a battle against the Titans from Greek mythology.

The Hunger Games is a 2008 dystopian novel by the American writer Suzanne Collins. It is narrated by 16-year-old Katniss Everdeen of District 12, who lives in Panem, the future, post-apocalyptic nation in America. The novels have a powerful story with shades of Greek mythology, Roman gladiatorial games, and a dramatic finale where one contestant is challenged to kill the other one. The books trace the impact of severe poverty, oppression, and the war on people’s lives and how they indulge in violent games for survival.

Matilda by Roald Dahl’s was published in 1988, and shortly won the Children’s Book Award. It has continued to delight audiences since then. The story is about Matilda Wormwood, who lives with her indifferent parents and is gifted with the power of telekinesis. Her school teacher Mrs Trunchbull is a strict bully who keeps the children terrified. When Matilda discovers her powers, she uses them to protect her friends from the evil nature of Mrs Trunchbull and to fight her unkind parents. The story shows how we can use our powers to achieve whatever we want in our lives.

Artemis Fowl is a series of eight fantasy novels by Irish author Eoin Colfer. The novels feature Artemis Fowl, a twelve-year-old genius. In the first book, he kidnaps a Fairy Holly Short and a LEPRecon, i.e., captain of the Lower Elements Police Reconnaissance Force. He indulges in the kidnapping to secure gold ransom by exploiting the Fairy People. In the next book, Artemis Fowl and the Arctic Incident, he sets on a mission against the Russian mafia to rescue his father by allying with the People. The series starts with Artemis as a villain and the Fairies’ enemy, but in subsequent novels, his character transforms from an antihero to a hero who resolves global conflicts.

These are some of the best young adult fiction books that they would adore and love to read. These books are not just stories but reveal a way of life to overcome problems and think a way out of odd situations that will empower young adults to become better adults when they grow up.